Eulogy From One Suburban-American to Another

I hate that I have to write about the death of yet another individual that through not only their art but their very personhood added fundamentally good things to this otherwise chaotic and cynical world. And yet, here I am. In the past 4 years, I’ve lost 3 such individuals.

The next on this tragic list is my old friend and insanely talented artist, Jason Chase.

When I heard the news from our chain of close friends, I was shaken. Emotionally addled. Gut-punched. Dumbfounded and Devastated (dumbfastated?) Saddened beyond what made-up words can express.

So let me do my best to tell you about my old friend, Jason.

I first met Jason our Sophomore year in High School. In fact, I had heard about Jason before ever even meeting him. His talent was widely known (at least amongst my small group of arty friends). One of them had shown me an incredible painting of Jimi Hendrix, and a legend was born. I was intimidated by this faceless talent before I got to know him. Especially as I had hardly begun taking my art seriously, and this kid was already creating work as good as any professional. So it took some time before I really got to know the person behind the art.

Our senior year was when my intimidation was deflated by his personality. We both had Anatomy class, then lunch, a free period, and finally English class. So after laughing our asses off in Anatomy, we would head off in his red truck, listening to Rage Against the Machine or Tom Waits while picking up some Sonic for lunch on our way to “study” for English class at his house. For the better part of a year, he and I spent a large chunk of each day hanging out, talking, laughing, and jamming to music. He always had an ear for good music, and my early tastes were certainly shaped by him.

A group of us quickly formed an arty cadre. We would paint in Jason’s garage, drink beer his older brother bought, and talk shop. One of my fondest memories was driving to Denver to see a film Jason had heard about showing at the Mayan in Denver. The movie was Basquiat, and it’s one of my favorites to this day. And the Soundtrack is a mainstay in my studio mix.

Colorado Springs was a cultural wasteland back then. So to find like-minded creatives was all the more important. To that point, I don’t think I would have become the artist I am today if not for knowing Jason Chase (more on that later).

Jason was one of the funniest people I’ve ever known. I would hope that he would have found my above made-up word hilarious. Jason had that kind of mind, once making up the name “Otis Pudstuck” simply to come up with a dumber name than Otis Spunkmyer. He introduced us to the most obscure comedy bits, which would immediately make their way into our vernacular. Once, he called into another member of the cadre and my college radio show and was a guest host of sorts. During one song, he dared us to turn on our mics and yell, “El DeBarge.” Why? Because it was funny. And we gladly obliged. This humor, of course, bled into his art which was often lighthearted and never taken too seriously.

I could keep going, but after re-reading that paragraph, I fear our adolescent inside humor isn’t going to hit the way it hit us while sitting in the screenprinting shop where he worked, housing Wendy’s burgers between laughing fits. So I’ll move on and just enjoy the occasional chuckle to myself when those memories arise rather than writing every single one of them down (you’re welcome). My point, I think, is that his laugh was one thing I’ll miss the most.

I also don’t want to dwell on how funny he was because he was also the most humble and grounded of artists, never taking his talent for granted. With all of his success, from showing and residing at the Warehouse in C-Springs in the early days to helping develop Singularity Black, he never lost track of what was important; making good art and enjoying the process. In fact, he would frequently take art everyone thought was incredible and mess with it. Partially out of disdain for such praise and a sense of reasonable self-depreciation, but primarily to challenge his own view of what was considered “good art” and using the opportunity to try out something new. 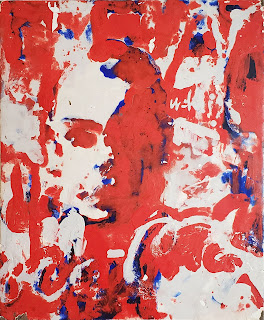 He particularly hated this one painting he did of a street in our hometown. It was huge, perfectly painted, and admired, especially by his family, who put it up on their living room wall. But because everyone liked it so much, he wanted to “destroy it.” So he painted a light wash of white over the whole thing just to see what would happen. As I see it, this was the genesis of his Silk-Wrapped paintings.

Another of his experiments that he hated, but I loved is to the right. It’s a balanced mix of his pop-art style and the more painterly work that I am into. It’s one of the only paintings of his I still have. And I’m pretty sure he would hate that I’m sharing it. He was extremely particular about his work, and if it didn’t fit his high standards, it wouldn’t be shown. So, sorry, Jay, but I love this painting.

He was never fully satisfied. Which in art makes one a better artist. And damn it, Jason was a good artist. Or rather, he was a damn good maker. Never liking the term “artist,” he would argue that he was just a maker. More of that humility bleeding through. And while his general pop-art style never changed much, he was always experimenting with, perfecting, and refining his work. And was never lacking in new and obscure references from our ad-filled childhoods.

After high school, our cadre went our separate ways. But summers were spent together. And after college, some of us went back home and some left. But whenever we were all together, it was likely in Jason’s studio. We would smoke cigarettes and listen to Tom Waits or De La Soul while talking about his next big project. Likely a Weeeble-Wobble that he wanted to blow up into some awesome pop-art masterpiece. I remember him working on a family of Weebl-Wobbles in a Weeble-Wobble house, brightly painted but placed in an incredibly awkward and tense family moment, a contrast that Jason thought was hilarious. Because it was never just about painting recognizable, bright, pop-art fare. Jason was incredibly thoughtful and wanted to make work that was attractive but also awkward, bright but also disturbing, eye-catching so as to draw the viewer to an uncomfortable, or tense, or often funny narrative.

Eventually, instead of being intimidated by Jason, I was inspired. I wanted to make people around me feel welcomed, at ease, and laugh, much like how he eased my initial intimidation. I also started to push and refine my own work and learn about processes and techniques to ensure my work met a higher standard. I also make sure to have fun with my work. More than anything, Jason had fun making.

I imagine this is the kind of educator he was. I never got to see him teach, but I am sure he similarly motivated and inspired his students. Add to this his jovial, kind, and warm personality, and I can confidently say that Jason was a consummate educator. I hope that those traits rubbed off on me in some measure over the years and have entered my classrooms.

Though gone, Jason will continue to inspire. Myself, his students, fellow artists, and all those that encountered him will continue to be fundamentally affected by knowing him. I’m hoping that by writing this, I can hold on to that influence and hoist a rag for him, a painting rag to be specific, that will be a continual reminder of who Jason was.

At some point in the last 10 years, we lost track of each other. I’m not sure exactly what happened, I was in Philly going to school, and he was in Boston teaching and painting. I started adjuncting and moving cities while he was doing TEDx talks and inventing new materials. It’s been years since I’ve heard him chuckle or talked about art with him. And I regret that time lost.

Regardless, I want to hoist that rag to Jason and keep it there so that his influence never wanes.

I’ll miss you, Jason, and though we haven’t spoken in some time, I won’t forget our friendship.